Succulent (Latin: succos = juice, sap) plants
are found in more than 60 families and 300 genera. Succulent plants have evolved special water-storage tissues in thickened or swollen leaves, stems or roots as an adaptation to the arid climates of deserts and semi-deserts. Many of these habitats are associated with high day-time temperatures and special mechanisms have evolved to collect and conserve the limited moisture that is available, sometimes only from dews, mists and fogs.
Where are succulent plants found ?
Succulents grow in most climates and are found on every continent except Antarctica. Most species of succulent plants grow in temperate or tropical climates. Africa has more species of succulent plants than anywhere else while virtually all cacti come from the Americas.
Water-filled tissues make succulent plants vulnerable to freezing conditions, but there are hardy exceptions that use high concentrations of metabolites as natural anti-freeze. Many succulents tolerate a degree of dry cold but most will not stand cold wet conditions for long. A few cacti grow as far North as Canada. A very few species of cacti e.g. Maihuenia poeppigii and a wider selection of succulent plants such as fleshy-leaved Stonecrops, Sempervivums and hardy Yuccas even tolerate the cold-wet English Winter.
Adaptations to dry climates:
Thickened fleshy leaves and globose stems minimise the surface area through which water is lost. The waxy cuticles of many succulent plants provide a physical barrier to loss of water. Surface hairs or spines on leaves and stems provide a microenvironment of reduced air movement close to the plant that also reduces transpiration. Some succulents have small or vestigial leaves, with sunlight mostly harvested by their green photosynthetic stems.
One mechanism is to grow a wide array of very shallow roots that can absorb sparse moisture from dews and brief showers of rain. By making the most of scarce available moisture, succulents survive in habitats that are far too dry for most other plants.
Crassulacean Acid Metabolism (CAM)  is a common biochemical strategy of succulent plants to minimize water loss. Carbon-dioxide taken up during the cool night is stored as organic acids to make carbon available for photosynthetic fixation to sugars while stomata are closed to conserve water in the heat of the day. The presence of organic acids makes CAM plants unpalatable to herbivores while their high concentration helps some species to resist freezing.
Convergent evolution has often found similar solutions to the problems of living in a harsh environment. It may be obvious that similar looking succulent plants belong to different families only when they are flowering, or from DNA analysis. The organisation of plants into families is being revised, thanks to advances in DNA technology showing how plant species are related. Some plant families are mostly non-succulent and include just a few succulent members that are adapted to particular niches in challenging environments. Other plant families are almost all succulent.

Leaf Succulents:  Their fleshy leaves are almost entirely composed of water storage cells covered by a thin layer of photosynthetic tissue and a waxy cuticle. Stomata are often fewer in number than in many non-succulent plants. Translucent windows in the top surface of some leaf succulents allows light to penetrate deep into their tissues even when the majority of the leaf is buried in the substrate. Muscilage within the leaf helps to retain water and resist extremes of temperature.
Examples: Aloe, Haworthia, Lithops, Sempervivum.

Cacti  are an important group of stem succulents, in which distinctive modified buds have evolved into specialised areoles from which grow multiple spines, hairs and glochids. Many species of cacti have lost or greatly reduced their leaves to minimise surface area and transpiration. However, there are a few leafy cacti with characteristic multi-spined areoles to remind us that the cactus family originated as spiny shrubs. Most cacti are succulents, but the majority of succulents are not cacti. 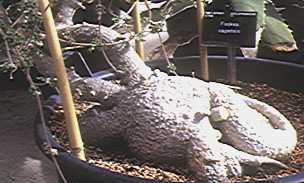 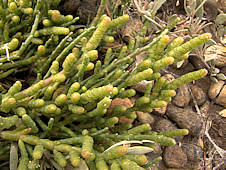 Halophyte Succulents  are able to survive in salty desert or marine environments by biochemical resistance to salt, sequestering salt from the cytoplasm in special vacuoles or by excreting salt. Salts often accumulate in arid soils so salt tolerance is more common among succulent plants than one might imagine. Examples: Salicornia, Sarcocornia.

The above mechanisms for coping with dry conditions may occur in combination, with more than one organ used to store water, but not all mechanisms will be seen together in every succulent plant.
Sadly, like many other flora and fauna, succulent plants are under pressure throughout the world from encroaching urbanisation, agriculture and the depredations of widespread non-indigenous livestock such as goats. While these pressures may be inevitable as human populations grow, there is much that succulent plant enthusiasts can do to promote the conservation and survival of this interesting group of plants.